The occupiers staged collectivization in the Luhansk region: under the threat of execution, they force Ukrainians to start sowing to stole the crop to Russia

Human rights defender in Ukraine Lyudmila Denisova said that the occupiers in the Luhansk region are trying to turn Ukrainians into slaves. Citizens of Ukraine who are on the territory of the so-called LPR are forced to start sowing to “nationalize” the grain later. “Nationalize” should be understood as “taking it from the Ukrainians, loading it onto trains and illegally taking to Russia.” That is a steal.

Farmers who refuse to serve Russia and its army of marauders with their labor are threatened with physical violence, confiscation of farm equipment and seed, and imprisonment. In Russia, Russians imprison Russians for reposting, and in Ukraine, Russians are trying to jail for refusing to be serfs in their own free and democratic country. In addition to collectivization, hungry Russians empty granaries and elevators in the temporarily occupied territories.

“In the Kherson region, the invaders emptied the elevator in Novoaleksiivka and took the grain to the occupied Crimea.” Denisova reports that a train with the inscription “grain” was also seen, which left the peninsula through the Kerch bridge,” Denisova reports.

In the same region, kadyrov-horde seized and devastated an agricultural enterprise that cultivates 20.000 hectares of fields with grain, sunflowers, medicinal plants, vegetables, etc. These are not the first examples of the marauding nature of a Russian person. Even at the beginning of the war, the Russians stole 5 ships with Ukrainian grain, which was for export.

We remind you that today in Kherson, the Russians planned a pseudo-referendum to create the so-called Kherson People's Republic, but the Ukrainians went to the rally and thwarted the plans of the occupiers.

On the cover of the article, you see a photo of Stalin’s collectivization: Ukrainians in the photo were taken all the grain they had grown. 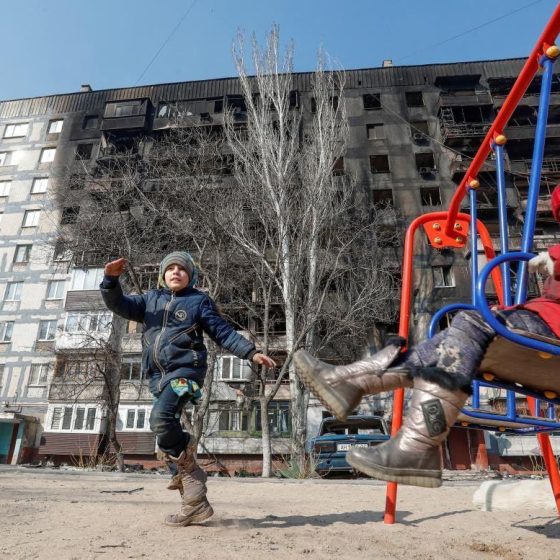 Taxes for Those Who Value Money More Than Humanity

On April 1, a law came into force legalizing tax increases for international companies that continue to operate in Russia

Rocket Strike on the Oil Depot

On March 26, the Russians used rockets against an oil base near Kyiv