Request a call
GTInvest»Blog»Timothy Snyder: “Russia Is a Fascist State”

On 24 February 2022, Russia, under the leadership of the Putin regime, launched a full-scale war against its neighboring state, Ukraine. By the way, the representatives of the aggressor country were never able to give a reasonable answer about the reason for the invasion of foreign territory. For this and many other reasons, people began to call Russia a state producing pure fascism in the civilized world. But for the first time, experts gave a summary of reasons that confirm this.

Timothy Snyder wrote an article for The New York Times on why Russia is a country of fascism and Putin is Hitler. Timothy Snyder is a famous American historian and author of books about totalitarian and fascist regimes and the history of Europe.

"We must say this aloud: Russia is a fascist state," wrote the historian and author of the article.

The author notes that Hitler considered the USSR, which included Ukraine, an artificial state. Now Volodymyr Putin is using propaganda to try to prove to the world that Ukraine never existed.

Nor is the aggressor country afraid to call Ukraine a country of neo-nazism and fascism. Such statements in Russia are supported by the fact that the Ukrainian president is a Jew. This similarity with fascist Germany in Russia is said from the first days, offending Zelenskyy and the memory of the murdered during the WWII Jews.

On the other hand, Russia believes that the existence of Ukraine is a plot by Western countries to destroy a strong and huge country.

However, according to the article's author, the war in Ukraine indicates who is a fascist and professes Hitler's rhetoric. The author gives structured definitions and evidence of his statement:

In this case, these are the participants of World War II who were born in Russia. In the Russian Federation, however, it is often forgotten that, together with the Russian troops, Poles, Ukrainians, Belarusians, Canadians, Americans, and Britons fought side by side. The aggressor country is proud of the feat of its ancestors, holds parades, and preserves communist symbolism. After February 24, 2014, the Russians say that their soldiers are repeating the feat of the heroes and freeing Ukraine from fascism. Russia has already invented special symbols like the nazi swastika.

It is now possible to observe the aggressor country becoming more and more like the USSR. On May 21, at Red Square in Moscow, the communist party of the Russian Federation accepted 5.000 children as pioneers. This is only one example of the state's going into the past.

All these points, according to Timothy Snyder, have parallels with Hitler and his worldwide war. 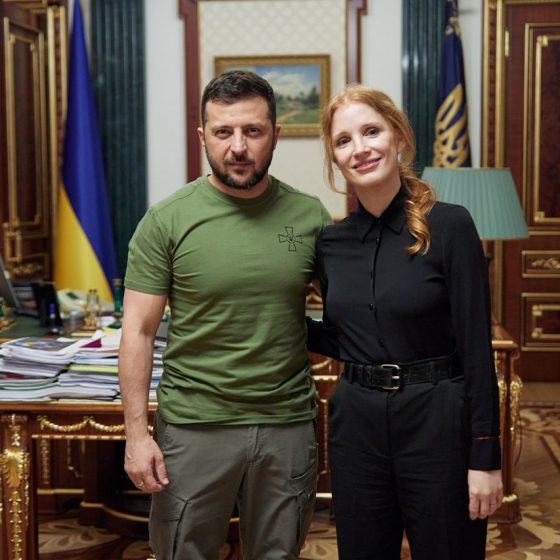 tress and producer met with the President of Ukraine, visited the city of Irpin, and visited children with cancer in the Kyiv hospital